If you have ever met a long distance runner for the first time, chances are it was not in the 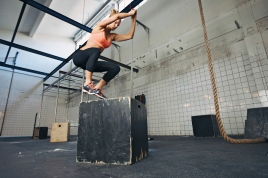 gym. Generally, understood as the hippies of the athletic world, these fitness nomads are the type of people who decide to run 15km to the starting line of a race, finish it and then run back home again. Mostly content with their own thoughts and rhythm of their own heartbeat, motivation builds itself from the constantly changing scenery which is passed in a single adventure.

The stagnant visuals of the gym, whether on a treadmill or lifting weights does very little in terms of excitement for a long distance runner but what it can do for performance is a topic worth exploring.
For much of my time as a runner the people I have met who share the same interests have been quite set on getting/staying lighter, measuring what they eat, measuring their heart rate, the distances they run daily/weekly/monthly….it becomes quite compulsive. So the mention of lifting weights and getting in the gym instantly brings visuals of bulky muscle and restricted movement, when in fact developing strength can truly benefit not only performance but decrease injury risk as well.

A number of resistance based training components have surfaced in the research looking to improve athlete injury risk, run economy and performance including speed. The three primary resistance based training modalities which have been investigated include strength, speed and the combination of the two, power. Additionally, the resurgence of balance as a mechanism for reducing injury risk has also brought forward the importance of sensorimotor resistance training.

Manolopoulos, et al, 2015, found that sensorimotor resistance training produced similar improvements to strength training in balance and force output. This should be taken into consideration when a running program is being designed with strength elements as sensorimotor training can be completed in a shorter amount of time due to needing to be completed before neural fatigue occurs. Similarly, a Systematic Review by Hubscher et al 2010, established that the neuromuscular effects associated with balance training were effective in the prevention of lower limb injury, specifically at the knee and ankle joint. However, what does not seem to be well defined is the dosage of balance training required to accomplish the desired effect.

Over the last twelve months we have looked at running economy associated with footwear and foot strike. Running economy can be defined as the energy expenditure during a steady state oxygen uptake to maintain a submaximal running velocity. A number of studies have shown a positive relationship between strength training and running performance. More specifically, the relationship of running economy and muscle stiffness in the utilization of an efficient stretch shorten cycle in force production. It is suggested through the literature that one strength training session a week is not enough to produce significant changes in running economy, however, 2-3 sessions a week can increase the running economy of middle to long distance runners.
A systematic review by Beattie et al, 2014, stated that muscular force adaption are dependant of the current strength level of the athlete, the exercises administrated and duration of the strength program. For a neuromuscular inefficient/ non-strength trained runner the most appropriate training type appears to be general maximal strength program for best development of force, power and reactive-strength.

That which is not made clear by the evidence is an agreement on the dosage of the strength programs in endurance athletes, with every paper including between one and five sessions per week for three to six months. However, one paper by Kilen, Hjelvang, Dall, Kruse and Nordsborg, 2015, found that there were similar adaptions to multiple training components as long as the total volume is the same.

There is no doubt strength training can have a positive effect on performance and injury risk for long distance runners. For those who truly wish to be their best at their chosen sport, sometimes it means having to suck it up and do the things you do not want to do. Many people who are involved in long distance running do so as a hobby in which they occasionally enter a competition or fun run and for those who do take this approach to training, strength development should also not be over looked, as the prevention of injury will keep you actively participating long into the future.