It’s been quite some time since we looked at tendinopathy in specifically in our FootNotes Publishing articles. Yes, there has been times where we have looked at the achilles, tibialis posterior, peroneus long all in a separate and more in-depth structure. But in that time great researchers and tendon enthusiasts alike have been producing have been producing some interesting and thought provoking pieces which have been shown to confirm but also challenge conventional thought; and in a couple of instances through a curve ball from left field. So let’s look closely at this short but interesting update.

Strength
The debate rages on, which time of muscle activation provides the greatest benefit for tendinopathy pain reduction and rehabilitation. The important thing to be aware of is all isometric, concentric and eccentric muscle activation have been found to have a positive benefit to the patient’s pain, function and strength. However, in a randomized controlled trial by Stasinopoulos et al, found a combination of concentric + isometric + eccentric activation had the greatest patient based results when compared to “concentric + eccentric” or “isometric” activation individually. 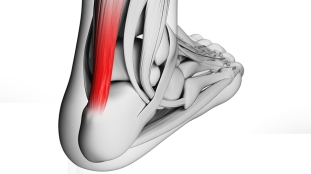 Another finding which may add sway to this previous mentioned finding, is the newly researched and promising aspect of Tendon Neuroplastic Training, a concept discussed
recently by Tom Goom (RunningPhysio).  His recent discussion on Tendon Neuroplastic Training informs us that although eccentric rehabilitation training may still have its place in clinical management, physiological/neurological adaption to Heavy Slow Resistance may have a much larger placement as we look to place the tendon under tension through a controlled and timely range of motion. This isn’t a whole new subject with Rio et al 2015, discussing the cortical inhibition and the ability of the motor cortex to control the body tissues.

A number of articles tried to link biomechanical deficits directly to tendinopathy injury, however, most of this was speculative due to the number of external and internal factors which may add to the individual’s presentation.

“Biomechanical deficits should only be considered red/yellow flags for injury and not something which can predict injury itself.”

Offloading & Footwear
Wearing et al 2014, were able to show that peak acoustic velocity in the achilles tendon was significantly higher during shod (10mm heel) compared to barefoot treadmill walking. However, the study was not able to take into account the individual biomechanical variables during walking which may have been associated with the correlation.
Further to this article it has been shown that shoes which have a highly cushioned rearfoot has potential to encourage a rearfoot strike and initial contact with that highly cushioned heel.

2014 – Platelet- Rich Therapies for Musculoskeletal Soft Tissue Injuries: There is currently insufficient evidence to support the use of PRT for treating musculoskeletal soft tissue injuries. More so, there needs to be the implementation of a standardization for PRP preparation methods.

So as you can see the evidence regarding lower limb tendon pathology, treatment and management has changes a little over the last couple of years and probably will continue to do so in the next couple of months. As a practitioner it is important to stay on top of what is being produced in the research community, identify the quality of the evidence and compare it to the previous body of literature before automatically including the suggested modality within your treatment plan. Similarly, if you are a patient and you hear about this brand new craze that is suggested to fix your ongoing pain you have had for six months, don’t assume it will work for you because a person on your TV with thick black glasses in a white lab coat and sterile looking room said it would.

Malliaris, P. (2017). Compression in Insertional Achilles Tendinopathy: Worth Worrying About?

1 thought on “Changes in Tendinopathy Research Findings Since 2013: An Update of the Evidence”