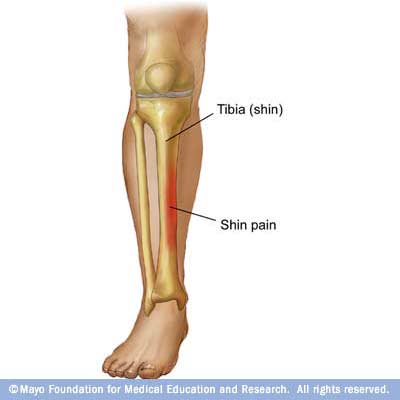 Shin Splints: An Overview of an Umbrella Term
The word shin splints has been used by patients and practitioners alike for  years to quite commonly cover a number of conditions which is probably not so appropriate for that ailment. From compartment syndromes to Tibialis Posterior injury to Medial Tibial Stress Syndrome and Stress Fractures, the term shin splints has been touted as the key term to use when patients describe a dull ache with the occasional sharp stabbing at or around the tibia bone.
The primary focus of the this article will be that of the both medial and anterior stress syndromes, how they come to be, the preventions which can be put in place and the how as a practitioner diagnosing and providing intervention early can be easily achieved.

Medial/ Anterior Tibial Stress Syndromes are simply defined as overuse injuries of the tibia or surrounding musculature due to repetitive contractions or tibial strain associated with overloading.
Patients will commonly describe the pain as diffuse ache running along the medial or anterior aspect of the tibia with occasional bouts of sharp pain during activity. Shin splints has an incidence of 4-35% and is seen to be most prevalent in runners, dancers and military recruits.

A conclusive etiology for medial /anterior tibial stress syndrome has not been decided upon by the research community. Periostitis of the tibia bone while under repetitive load has been floated regularly amongst the literature; however, more recent studies suggest that the conditions can be placed within a spectrum. The idea of a spectrum for issues associated with excessive or over indulged load almost seems too convenient. Put simply – what chronic condition cannot be put on a spectrum?
The use of a spectrum places MTSS/ATSS into its own umbrella term with a less laymen descriptive name for the condition.  This has potential to open up a whole other issue associated with how specific we should be when labeling a condition and the treatment options, legal ramifications and perception of incompetence it can have upon a practitioner; so to limit the rant let’s stick to the issue at hand.
Other authors have put forward the theory that fascia plays a significant role in the physiology of shin splints. Bouche and Johnson have described the contraction of deep leg flexor tension being placed on the tibial crest, however, although sound in theory this has only been backed by the use of nonspecific soft tissue interventions.

The development of shin splints has a high correlation with rotation forces upon the lower limb. This can be contributed to a number of defining factors however, poor proximal strength of the glutes and core muscles as well as excessive pronation at the rearfoot are most likely when assessing a patient.
The importance of proximal strength and lower limb injury can be revisited here: https://footnotesblogging.com/2015/02/26/proximal-muscle-strength-and-foot-injury/
Excessive pronation beginning at the rearfoot and therefore increasing rotation upon the tibia can be addressed both individually and as a multiple approach prevention tactic; strengthening of both extrinsic and intrinsic muscles are required for slowing of pronatory forces however to what extent you can limit pronation through strengthening alone in an individual is yet to be seen, the aim is to develop the body to be able to handle the stressors placed upon it rather than limit pronation itself.
The use of offloading devices can also be useful in the prevention of shin splint development or re-occurrence. Highly dependent on the individual and their identified biomechanical contributors, this can be as simple as a 4mm medial wedge to the use of a custom orthotics. Of course using the in-shoe devices to offload or limit the pronation at the area of concern while strengthening over a period of time would be expected to yield the best results.
Additionally, increasing lower leg flexibility and reducing soft tissue tension will also have a positive impact on the prevention of shin splints.

To ensure that a correct diagnosis can be made a full medical history, activity log, biomechanical and footwear assessment should be obtained. The observation of tell-tale training errors should be noted as well as any surfaces the patient may be training on which are considered inappropriate. Female patients have a greater risk of progression through to stress fracture and should be considered for more in-depth medical imaging earlier in their presentation.
The most common misdiagnosed or potential differential diagnosis are those which would fall on the previous discussed spectrum but are as follows; acute or chronic exertional compartment syndrome, muscle tears, stress fractures and syndesmosis injury. Other conditions are more aligned with cardiovascular issues such as; peripheral vascular disease, venous thrombosis, popliteal artery entrapment and infection.
Imaging is not generally required when diagnosing shin splints, however, MRI has begun to be the more sort after technique due to the ample information it is able to provide for both soft and hard tissues of the body.

Conservative treatment for shin splints is best done through a multiple intervention approach. In the acute stages it is highly advised that the use of rest/offloading, icing and NSAID use is put in place however, this should not exceed any more than the first 48hours. In the sub-acute phase training modification should be look at; in most cases decreasing activity levels by 50% will be enough to improve symptoms without complete cessation of activity. Additionally, in replacement for the reduce high impact activity a regime of lower leg stretching and eccentric strengthening may be used to reduce fatiguing factors associated with contributing biomechanical abnormalities.
Footwear can be used as a modality by reducing the amount of shock distribution through the lower leg with the correct cushioning. In-shoe devices such as medial wedging, D-fillers and custom orthotics can be also used if deemed appropriate with the shoe which is best suited for the individual.
Soft tissue therapies such as; massage, mobilization, dry needling and assisted stretching all have a place in improving muscle tensions however there has been very little in the way of RCTs published specific to shin splints.
Finally, proprioceptive training is necessary for neuromuscular education and adaption. This modality is has been one which has been overlooked for time and time again but is beginning to hit mainstream clinical implementation with recent publications related to ankle instability and the impact of proprioception tasks on tendon rehabilitation.

More invasive treatment options are available for shin splints although are only used in very rare cases. Posterior Fasciotomy is reserved for those with recurrent shin splint pain which has not been successfully reduced via conservative approaches. The surgical option has shown relatively positive result with 69%- 92% having significantly reduced symptoms.

In closing the use of multiple interventions which focus on soft tissue therapies, flexibility improvements, reducing rotational forces and when appropriate referring for surgical opinion will lead to faster recovery and return to sport for the athlete. Being able to educate the patient about the condition they have and how each intervention put in place will move them a step closer to recovery is an important factor in increasing compliance. Keeping a patient in the dark about what their condition is and why treatments are put in place only leads to mistrust, skepticism and following that, self discharge or delayed heeling.
Get the patient on board from the start and allow the patient – practitioner relationship to blossom!

In our next article we take a look at Part Two of our pain series with a step away from the anatomy and physiology of pain and the delving into the psychology (this is the interesting stuff!)