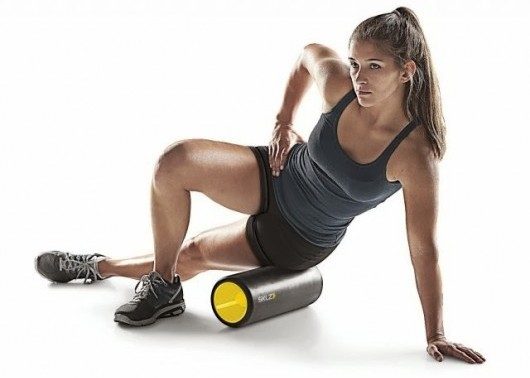 Myofascial pain is a common muscle pain syndrome which is associated with discrete rope like bands of hardened muscle which contains regions of muscle tenderness. Myofascial pain has been known to illicit referred pain in distal sites to the primary area of concern. The site of pain perception has potential to be in the same limb, region, and body wall or within a visceral organ. Quite commonly however, referred pain tends to be segmented and the area in which the pain responds will be associated with the innovating spinal segment.
When dry needling the peroneus longus trigger point, pain can at times be felt distally following the S1 and S2 segments and those areas associated with the branch of the femoral nerve. This can sometimes travel as far lateral mid-foot.

Myofascial release therapy is a highly interactive approach requiring a response from the body of the patient to elicit maximum relaxation of the tight and restrictive tissues. Clinically, myofascial release is effective in reducing a patient’s pain and improving their quality of life when suffering pain associated with the musculoskeletal system, additionally, (College, 2014) found stretch-tension myofascial release protocols to be beneficial in improving a patients quality of sleep (p<0.05) and depression (p<0.05). The patient’s self reported pain and pain related disability was also seen to reduce. This may be due to the use of physical therapy and the process of touching or being touched by another is thought to reduce restrictions within the durameter which covers the brain, allowing for better perfusion.
Fibromyalgia affects 3-6million people worldwide and is the 3rd most prevalent rheumatological disorder. It is non-articular rheumatism characterized by musculoskeletal pain, stiffness, fatigue, and spasm and sleep disturbance. Fibromyalgia is a contributor to the 35-50% of the general population who suffer from chronic musculoskeletal pain.
Myofascial release helps facilitate sleep through the aiding of serotonin release, a calming mediator for the body and a reducer of the stress hormone cortisol.
The reduction of stress and anxiety is shown to lead to a reduction of pain and therefore an increase or equalization of mood.

Myofascial trigger points have an interdependent relationship with fascial restrictions, leading to dysfunctional movement patterns and an increased risk of injury. There are a number of ways in which myofascial trigger points can be addressed and to ensure the best optimization of the therapy it is important that the practitioner is properly training and experienced in the intervention. The most common therapies are as follows:
Positional Release – Placing muscles in a shortened position to promote relaxation common seen in the podiatry would with the use of orthotic devices.
Active Release – Placing muscles in a lengthened position with pressure upon the trigger point.
Self- Myofascial Release – The use of a foam roller, spiky bally or hands to massage one’s self.
Trigger Point Release – Applying downward pressure locally to lengthen muscle sarcomeres and create a flushing of metabolic byproducts.

When it comes to myofascial pain associated with trigger points there is a distinct lack of evidence for the use of Non-Steroid Anti-Inflammatory Drugs. It is suggested that muscle relaxant be a first line of medical intervention to decrease the pain intensity and secondary disability to p>0.01 from baseline. The use of dry needling both with and without lidocaine have been found to be effective if they illicit a “twitch” response, however, trigger point injections have been shown to display less discomfort during the intervention. Additionally, deep tissue massage, use of superficial heat and other myofascial release techniques can be used as an adjunct treatment. The evidence suggests that myofascial release does not improve nor hinder muscular performance. The hindrance of muscular activity would suggest that the intervention be not suitable directly before sporting event, however this is not the case and therefore has potential to reduce pain and increase overall performance.

Myofascial release is a good adjunct treatment for those suffering from muscle pain. However, the primary assessment should be decisive on what is causing the trigger points to develop and reducing the impact that cause is having upon the individual.

As you can see from the evidence above, the use of soft tissue therapies can have a great effect on your general health and wellbeing. This can be specifically used for injuries however; a general tune up or relaxation session has its place when dealing with high pressure, long duration or stressful situations. Most people are not even aware how tense they are until they have the time to sit and focus on relaxation or see someone about it. If this is the case with you and you have been thinking about having this type of issue looked at – then don’t hesitate to see your local podiatrist, myotherapist, massage therapist or allied health practitioner for treatment and advice.

Until next time, thanks for reading.

Bertolucci, L. (2010). Muscld Repositioning: Combining Subjective and Objective Feedbacks in the Teaching and Practice of a Reflex – Based Myofascial Release Technique. International Journal of Therapeutic Massage and Bodywork, 26 – 35.

College, K. (2014). Effects of Myofascial Release Therapy on Pain Related Disability, Quality of Sleep and Depression in Older Adults with Chronic Low Back Pain. International Journal of Physiotherapy and Research, 318-323.

Gerwin, R. (2005). A Review of Myofascial Pain and Fibromyalgia – Factors that Promote Their Persistance. Education and Practice, 121 -134.