At the beginning of the year we slightly touched on the different types of shoes available on the market. These fell into the categories of; Minimalistic, Traditional and Maximalist, and while these three broad categories tend to cover the spectrum of running shoes, that which was not touched on was sport specific shoes and the benefits/ negatives associated with these options. Basketball shoes, netball shoes, tennis shoes and skate shoes all flood the market with celebrity endorsements and product placement convincing you it’s the right option for you, but is it?
Let’s have a look at the generic types of shoe available via popular sport and weigh up the points.

Basketball Shoes
When it comes to basketball shoes there is no bigger celebrity based spruiker of merchandise. Everybody wants to be like Mike, rule like King James or have kicks like Kobe. The celebrity endorsement of this type of footwear has been so successful that the technologies placed into these types of shoes have been at a standstill for quite some time. Many people believe that because they see the people they admire, the stars of the game wearing these shoes that it is the best footwear to play in for them. Others are still debating on whether high tops or low cuts give better support to the ankle.
Well in regards to the ankle support argument, the evidence currently suggests that the placing external support at the ankle in regards to high top footwear has no significant affect on the ankle joint itself.
Additionally, it can be theorized that high top support can sometimes restrict ankle joint movement and has potential to lead to injury further up the chain at the knee or hip as momentum is search for at proximal structures.
What we don’t have the privilege to see in many of the elite basketball sporting stars of the world is what they place inside their shoes and what shoes they wear during training sessions when the camera are on them. In many cases the low profile, small/minimum heel drop athletic shoes of basketballers have been modified with custom made orthotics designed to off-load areas of the foot or reduce biomechanical issues which may contribute to injury during game play.

Netball Shoes
When it comes to netball shoes the market seems to consolidated by ASICS and for good reason. The ASICS Netburner range has a number of well developed shoes of varying support to suit people of all requirements. That being said, this does not mean that the Netburner shoe is necessari

ly the correct shoe for you. Finding a good netball shoe requires knowledge of how you run as well as the movements associated with netball. In many cases a running shoe of any kind will most likely fall apart reasonable quickly when playing a sport like netball due to the high amount of cutting and pivoting moments which place strain on a product primarily made for linear direction movement patterns. A cross-training shoe or a specific made shoe with a wrapped outer-sole which protects the shoe’s upper from being damaged by dragging movements is the best option; additionally a shoe which is well cushion and provides some structured support is also a positive. As stated in the previous paragraph, ankle joint bracing or external support is of little use in games of high impact such as netball and basketball. 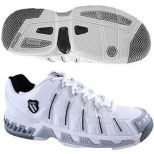 Tennis shoes or shoes for most racquet sports require a broad base and increased lateral stability to enhance athlete foot position when cutting or sliding for a far reach shot. K-Swiss seem to be the go to shoe for a lot of athletes looking for a tennis specific shoe. Additionally, similar to that of a netball shoe, having an outer sole which wraps around the base of the shoe to limit friction upon the shoe’s upper and the mesh or soft leather tearing.

Racing Flats
When running competitively many athletes will chose to run in a shoe which is low bulk and low weight in comparison to their traditional training shoe. The benefits of this are decreased weight and better surface change awareness. The negatives include; poor cushioning for the foot, less stability and increased risk of injury. That being said, if a reasonable strength and conditioning injury prevention program has been complete then these risks are substantially limited and may lead to faster competitive times and increased oxygen utilization. See: https://footnotesblogging.com/2014/09/25/90/

As you can see, there are a lot of positive and negative factors associated with popular sports specific based shoes. Those which are touted by the celebrity personas are commonly aesthetically pleasing and confidence boosting as companies try and tell you “you can be like Mike”. The truth is many of these high profile athletes also have very detailed injury prevention programs to reduce their chance of musculoskeletal breakdown as well as some type of inner-sole or orthotic to support them while they play their chosen sport. The shoe they chose to enter the court/ground/pitch with may not be that which they train in and may be kept strictly for the 40mins of game play and not the 10 hours a week of training they participate in.
So there is a little food for thought on the matter of sport specific shoes, I’ll let you make up your mind on that which you believe to be the best option.

Until next time, thank you for reading.

2 thoughts on “Rotating Your Tyres: Why it’s Important to Have Multiple Pairs of Shoes”