Heel pain can be one of many different diagnosis involving both hard and soft tissues of the rearfoot and lower leg. It has been found to affect 1 in 10 people of the population and can have an impact on the quality of life of individuals who experience it. One such objective finding in those with heel pain can be heel spurs, but are they the real reason for pain?

The region of the foot identified as the heel or rearfoot is composed of a number of structures, both soft and hard tissue. However, in most cases people will be referring to the plantar surface of the calcaneus bone and superior fat and dermal layers. A Plantar Heel Spur will commonly form at the calcaneal tuberosity also associated with the origin of the plantar fascia.
Heel spurs are slowly fading out as a lay term for what is more commonly plantar fasciitis or heel pain not directly associated with the spur at all. A number of reasons for the development of heel spurs have been suggested nominating both longitudinal stress and vertical stressors as potential causes. That is, the heel spur may be caused by factors associated with increased tension in the plantar fascia due to a pronatory moment over a long period of time or a bone reaction to long term vertical ground forces. Both which will be explored in the up-coming article.

In a study by Menz et al 2008, it was found that those assessed radiographically for heel spurs between the ages of 62 and 94 were more likely to be considered obese and have previously or currently have experienced heel pain and the presence of osteoarthritis. There was no relationship found between heel spurs and gender or foot posture.
As a result of the findings, vertical compression theory was supported over that of longitudinal stress.
Although the study was well thought out and executed, it does not supply information related to a patient’s foot structured during dynamic movement and the forces placed upon the calcaneal tuberosity during pronation and resupination. 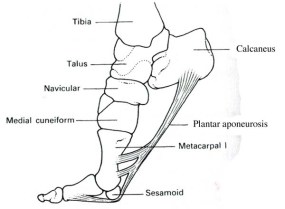 The dynamic function of the foot during walking and running will change multiple times over a life time. As a standard for foot function during walking gait the premise of landing on the lateral heel, before pronating toward mid-stance and resupination as the individual moves into toe off.
This is important to be aware of as it is with the act of pronation that the plantar fascia with begin to stretch, tighten and store energy for releasing that energy in the propulsion of an individual. The plantar fascia’s origin is at the calcaneal tuberosity where a typical heel spur will form and thus longitudinal stress can occur at this origin leading to a number of physiological and anatomical changes at the site.
With people taking as many as 10,000 steps a day and an increased rate of obesity in the population stressors at this structure are increased and place more longitudinal force at the plantar heel.

Heel spurs have now been dismissed as the direct cause of pain at the heel unless associated with a stress fracture or atrophied fat pad and muscle bulk which increases the direct forces at the site of the plantar heel. Plantar heel spurs have been seen in patients without pain as much as those with pain. Additionally, those who have had pain in the past and been identified radiographically as having heel spurs have been shown to be treated for their pain and continued to have the heel spur increase in size. At this point in time radiographic evidence of a heel spur should have little to no impact on clinical decisions.